My old school had a Bechstein Grand in the hall. From time to time, the piano had to be moved from one end of the hall to the other, but there was a slight problem: the piano suffered from a couple of weak legs. A whole class of boys were stationed around the piano, and as a group, lifted it and carefully carried it across the hall. Health & Safety would have something to say about this now, but back in the 'dark ages', nobody bothered about such things!

Although I did not play the piano at the time, I was always fascinated by the piano and loved to look inside at the strings and at the dampers moving up and down as the piano was played. I little knew that one day I'd be sent to work on this very piano!

A few years after leaving the school, as a newly qualified piano tuner, I was called in to sort out a problem with the piano legs. The school was concerned that from time to time, the piano had to be moved from one end of the hall to the other. For some reason, now was the time to sort it out!

Bechstein Grands of this age have legs that simply screw into the underside of the piano. The screw is part of the hardwood core of the leg and is about 6 cms. in diameter. I tightened up all three legs and the piano was as safe as it could ever be! The job was done in under 5 minutes!

I am sure the piano had been 'weak on the legs' for at least 6 years. Remarkable - miraculous that nobody, to my knowledge, had ever been injured by this unsafe piano!

Many years later, I was helping moving pianos around a warehouse. Piano warehouses often get so clogged up with pianos that invariably, the one you need to work on, is over in the far corner 'buried' behind 4 or 5 others.

We came to move an old Broadwood Grand. There was a problem with one of the legs - but I didn't know it at the time! The pedals had not yet been fitted either - perhaps there was a problem with them as well! Of course, as luck would have it, the leg that gave out when we tried to move the piano was the one nearest me.

When piano legs break, there is no cartoon-like pause before the inevitable crash, no luxury of any thinking time. I looked down at the treble end of the piano, now resting heavily on the concrete floor and noticed - with relief, that my foot was about an inch from where the brute had hit the ground!

When pianos have to be moved, there is very good reason to be aware of Health & Safety!

Posted by Steve Burden at 21:55 No comments: 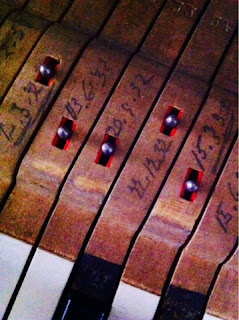 Posted by Steve Burden at 23:57 No comments: