John Brinsmead began life in rural Devon and among his early ambitions was that of being a farmer! His elder brother Henry moved up to London and began building his own pianos in 1835 and for a couple of years he and John worked together. After a falling out John set up business on his own. 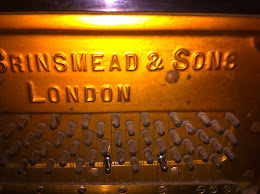 Increased production levels put severe strain on the site of the original factory at Chenies Street and so a purpose-built factory was opened in 1874 at Grafton Road, Kentish Town. Some 15 or so years later an extension was needed to cope with the demand created  by strong sales abroad.

The firm went from strength to strength supported by the factory at Kentish Town and the showrooms at Wigmore Street. Part of the success was due to John’s very close watch on quality control and his knack at self-promotion! This not very ‘English’ trait did not go down well with the likes of Broadwood and Collard. However, timidity does not yield rocketing sales.

1899 Brinsmead became a Limited Company managed by Horace Brinsmead - John’s youngest son. Horace set about modernising the the business and introduced 10 new models by 1900. Alas, another family fall out led to Horace leaving the firm  in 1903.

John Brinsmead died in 1908 and in the spring of 1921, the firm was declared insolvent. There had been difficulties for Brinsmead’s for at least a decade but the manager, Henry Billinghurst had even considered closure about 1912. He had made careful plans to reduce the the severity of the fallout as much as possible.

In 1921 the name and goodwill of John Brinsmead & Sons was purchased by Walter Saville of J. B. Cramer. The further production of Brinsmead pianos was transfered to the Saville factory very close by at Castle Road, Kentish Town.