Jane Austen mentions a Broadwood piano in at least one of her novels. In her day, pianos were objects of status and the ability to play was proof of a refined education. These things no longer carry the same significance though of course, the dynamics of status are still with us. The objects desired today are smart phones, expensive cars and the latest technological gadgets!

The Broadwood name is known only to pianists who probably were told long ago that Broadwoods were the best English-made piano. However, such a high opinion of Broadwood Pianos was not universally held - years ago, I remember an elderly tuner say, somewhat unflatteringly: "Ah yes, Broadwood Pianos! The bass is very broad, and the treble very wooden!"
Quirky English names on elderly pianos can be amusing - especially as in the business world have to be catchy or striking in some way. How about the following: Thompson & Shackle; Jarrett & Gouge; Skerrett; or Dunmo, Ellis & Hill; Duck, Son & Pinker; Dale Forty; Green & Marsh; Wallis Harris; Witton & Witton. 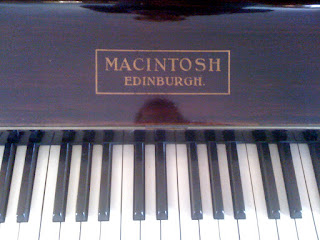 This Macintosh piano has absolutely nothing to do with Apple Computers and I do not imagine that Apple Mac will ever dabble in making acoustic pianos. This is an inexpensive piano made in Edingburgh. Straight strung, over damped, rather tired now, but with a decent enough tone and quite tuneable.

There was an old German maker called 'Lubitz' but you don't often see a Lubitz piano here in the UK. One might think a firm called 'Lubitz' made toilet spares!
© Steve Burden
Piano World

Posted by Steve Burden at 00:13 No comments: