Broadwood Pianos have been around since 1728. Not many examples of an 1860s Broadwood piano survive to this day. Ordinarily, I am not a fan of these relics of the 19th century but occasionally respect has to be paid where it is due. I have come across 2 such pianos that deserve mention. When these particular pianos were new pianos, they would have been stunning examples of high-quality, English craftsmanship.


One of the pianos must have been at least 7' 6" long - if you sat at the keyboard and squinted a little, you could just about make out the far end of the piano! I did not expect it to be up to pitch, but it was only a quarter-tone flat. The strings had been replaced at some point but the wrest pins were still the old, oblong ones that were fitted when new. One of the pins in the bi-chord section of the bass strings had snapped off, so instead of two strings on that note, there was only one.

The hammers had been recovered, but not terribly well - the high treble hammers jammed against the front edge of the wrest plank. Not too much of a problem for most players, but we tuners like all the notes to work!

The rich colours of its rosewood case, made it a very fine-looking piece of furniture. The flat wooden pedals always look odd to modern eyes but at least they are the 'real thing' - if they had ever been replaced with modern pedals, it would no longer look the part.

The ivory keys were still white and still had a shine to them. Some were worn thin in the middle of the playing surface, but this is not surprising after more than a century's use. So often, the original ivories are yellowed with age, and usually a few of the originals have been replaced with ill-fitting substitutes.

So there it was, this remarkable old piano, in a charmingly renovated house that was even older than the piano, - a perfect setting for so well-preserved an instrument. The fascinating thing is that after 150 years, this piano is still regularly played, loved and appreciated. John Braodwood & Sons certainly knew how to build a piano that would last!


The second piano is another grand - the serial number of this piano does not fit neatly into any of the categories listed in the Pierce's Atlas, but I reckon it must have been made about 1860.

The case, for its age, is stunning - the rich Rosewood veneer still boasting the bold stripes of the grain. The polish has been preserved to the point that most would not think it in need of any particular attention. 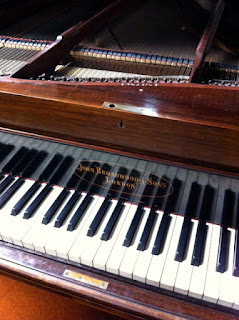 But from a tuner's point of view, the most remarkable thing is that it is only a little flat in pitch - (I believe when this piano was built, the standard pitch was a little lower than A 440.) Over the years, 2 bass strings have been replaced, and couple of treble strings - apart from these, the strings are those fitted when new! A few treble strings are absent. The original oblong tuning pins still holding firmly in the original wrest plank!

The piano is regularly used for a to accompany singers, occasionally for concerts but is always appreciated by pianists and audiences alike. Live music is still a wonderful social phenomenon that dates back to long before this piano was made.

The action is one of the odd incarnations of Broadwood's own design but still playing acceptably and capable of expression and colour. The tone is the one big give-away, but even here, the sound is extremely good for its type.

These grand old pianos are from a time when serious craftsmen built everything to last, a time when gentleman tuners wore hats. If I had a hat, I would take it from my head as a mark of respect, a salute to the beauty of  esteemed craftsmanship. These pianos are works of the piano-maker's art.

The changing face of the Piano Trade

It is lamentable that the Piano Manufacturing Industry in England - once so enviable and influential, has disappeared without trace. Back in the 1970s, noticing the first few imported pianos from unfamiliar makers, one could sense that change was in the air. Complacency in any industry is a bad policy. Once a decline gathers momentum, the result is inevitably grim.

Seeing a Yamaha piano for the first time was like seeing a 'cloud the size of a man's hand' - a cloud that in no time at all, filled the heavens and brought a great deluge of rain! The first batches of Yamaha pianos delivered to the local piano shop created astonishment. It was clear the Japanese piano was going to be a threat to the market dominance enjoyed for so long by the English piano. How was it that a piano made in Japan could be sold for just a little more than a piano made in the UK?

The best British pianos seemed to be rather average compared to the imported pianos that soon dominated that new-piano-market. One by one, the English manufacturers ceased production so that in a few decades, we saw the total loss of an industry. Alas for the English Piano!

The more recent economic downturn has added still more to the worries of Piano shops. Pianos are regarded as a luxury item - and are one of the first items of expenditure to be delayed or postponed entirely.

Where will all this take us? Only the 'fittest' of piano shops will survive, and it will take a few years of successful trading to put a smile back on the face of the piano trade.

Buying and selling pianos on eBay may turn out to be the method of choice for bargain hunters  - but there are plenty of dangers to be met with here. Off-loading an awful piano is quite easy if you can produce a few good photos! Auction Houses have, for a very long time, been selling what other people no longer want. Maybe, ebay will be able to preserve a strong, residual demand for the good old-fashoned, traditional piano!

The chances of today's events happening the way they did are so small that it is very unlikely ever to happen again.

My first call today was in a village in Wiltshire, not very remote and not exactly tiny, but certainly had much less than a small-town feel. There must be a few hundred houses there and of these, a small proportion would be have a piano. Over the years, I have visited only a couple of houses in the village with pianos. The house I was working in today has 2 pianos (both Bluthner grands) - they will be used for piano exams tomorrow - hence the date of my visit.

When I arrived at the house this morning, I thought something was a little different about the house almost opposite - It seemed tidier than before, the driveway was spacious and clear. As I have never had reason to take particular notice, I cannot honestly say there was a change but something just felt different.

The pianos I was working on were in a first-floor room close to a window overlooking the road. About an hour and a half into my work, I heard a truck stop just outside the house and prepared to reverse into the driveway mentioned above.

The timing of this moment is very interesting as I just happened to be standing up. From where I stood, I could see only the top of the truck sides but was able to make out the tops of the letters of the logo on the side of the van. As there was something familiar about it, I had a second look to make sure. Could it be 'G & R'?

Sure enough, it was! G & R, are well known piano movers, moving pianos for the piano trade. They must still be one of the main piano movers in the country. And yes, they were delivering a grand piano to the house just over the road from where I was working.

I would imagine, this would have been the first ever visit by G & R to this particular village. I go 2 or 3 times a year to tune the pianos I worked on today. The delivery could have been down at the other end of the village - had it been, I would not have known anything about it, but no, it was to the house just across the road from where I was. Wondering on its occurrence, I conclude it was just one of those strange, inexplicable happenings that was meant-to-be. A real 'tuning' coincidence!

Posted by Steve Burden at 00:22 No comments: