The history of the Steinway Piano begins with Heinrich Steinweg. His father, a forester, had to leave his large family while taking his older sons with him to fight in the Napoleonic wars. On the father's return, only Heinrich and 2 other children had survived from the lack of proper food and shelter. Even this was not the harshest blow to hit the young Heinrich - shortly after, his father and the remainder of his family were all struck by lightening! Henrich's ability to survive was further proved when he was awarded a medal for bugling in the face of the enemy during the Battle of Waterloo. 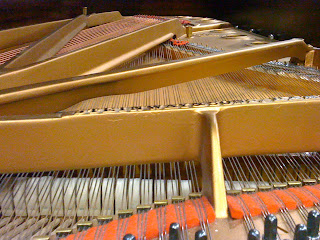 After the war, while still in the army, he devoted his spare time to woodwork and the making musical instruments. He made a mandolin, a dulcimer and a zither. Perhaps he had absorbed an understanding of wood from his father, but his talent with wood was permanently to change his fortunes and by so doing, give the world of music the gift of the Steinway Piano!

Before long Heinrich had decided to devote all his time to the making of pianos. The political turmoil of 1848 threatened to interrupt the onward progress of the Steinweg family and business. His son Charles who had previously moved to New York, persuaded his father to join him in America. So it was that Heinrich Steinweg emigrated and changed his name to Henry Steinway.

Henry took great care in selecting timber for all the different parts of the piano. His innate understanding of wood was at the core of his piano building principles. His sons each absorbed Henry's vision and brought to the business their own skills and abilities as engineers, craftsmen and researchers.
Firmly established as among the very best of piano makers, Steinways strengthened their place in the music world still more by sponsoring concerts and tours featuring the most prominent pianists from Europe and America. Consistently building success upon success, the Steinway Piano has earned its place on the concert platforms of the world. Many Steinway pianos become treasured heirlooms handed down from generation to generation.
The story of the Steinway piano began in the privations of the early 1800s but looks into the future with assured security and universal acclaim. - This is a worthy legacy from a young survivor with a talent with wood!
Steinway Serial Nos.