Kemble Pianos was established in 1911 by Michael Kemble in Stoke Newington. Details about the history of Kemble pianos are hard to find - even on the Kemble website, the ‘history’ page is confined to 9 bullet points.

And yet, Kemble Pianos, having survived both the war periods and the consequent economic hardships, went on to build good, quality pianos and attract the attention of the giant Japanese piano maker - Yamaha.

Examples of early Kemble pianos must survive but as a tuner in the SW of England, rarely does one see a pre-1920 Kemble. During the post, First World War years, reestablishing the momentum of sales must have been particularly difficult.

When the ‘minipiano’ became so popular, Kembles Launched the ‘Minx’. The Minx was a neat, small piano with a full keyboard - probably the best of the minipianos on offer. As an overstrung piano and yet being so short, the design of the Minx was all about getting a small piano to perform and sound as well as what was expected from a standard upright piano. The distinctive Minx remained in production for 30 years! The case altered in later years but the inner workings of the the piano were recognisably very similar to the original.

Under Robert Kemble, in the 1950s Kemble Pianos moved to a factory in Bletchley, near Milton Keynes. It must have been around this time that the The Kemble ‘Classic’ was designed, built and launched - another small but full 7 octave piano - taller than the Minx, but a very slim, 47 cm from front to back.

In 1968, Kembles began a joint venture with The Yamaha Corporation of Japan and, a few years later, Yamaha-Kemble Music (UK) Ltd. was formed. In 1985 Kemble and Co. started making some of the Yamaha range of pianos to be sold in the UK market. The Kemble pianos now reflected the Yamaha influence and used the high quality Yamaha actions in their pianos.

Kemble pianos, since 2009, are now made in Yamaha's factories in the Far East but the Kemble name - quite deservedly, lives on!
Kemble Serial Nos.

Memoirs of an Apprentice Piano Tuner

At the start of my apprenticeship - back in 1973, pianos were still being made in the UK. In those early days I was bewildered by the sheer number of piano names. When the older apprentices talked about these obscure and odd-sounding names, it was almost like listening to a foreign language. Strange how quickly one makes sense of these things. Very soon I was spouting the same in-house piano-speak and relishing the idea of confusing any unfortunate outsider in ear shot.

There was an unofficial rating system of the pianos in the shop - rated by the accumulated experience of young apprentices! From memory, the order from the preferred to the unfavoured was something like: Welmar,  Knight, Kemble, Monnington & Weston, Eavestaffe, Barrett & Robinson, Zender, Bentley. (This order might be disputed by others.)

I do not remember seeing new European pianos in the shop other than the occasional Zimmerman - but down in the workshop among the apprentices, these were not liked at all.

The nearest piano factory to where I lived was Bentley's at Stroud. We occasionally passed it while en route to Cheltenham on the A46 but because the Bentley pianos of the 70s were never well thought of, their factory at Woodchester did not particularly capture my interest.

Our workshop was beneath the grand Georgian streets of Bath. We sometimes referred to it as the crypt. The workshop itself had plenty of daylight - about half the area of roof/ceiling was of glass which was likely to leak when the weather was bad. On summer afternoons, while still working, we would gently cook in the sun's heat which was magnified through the glass.

The warehouse/store next to the workshop had no natural light at all and was poorly lit, dusty and full of old pianos in for storage or repair. The air was thick with the smell of bone glue, piano felt and dust - a unique blend of aromas which belongs only in piano workshops.

On my very first day, I was given a job cleaning action parts. The foreman was an older local guy who talked with the broadest Somerset accent I'd ever heard. He asked me a question which even in my extreme effort to be polite I could not decipher, so I had to say "Pardon?" Clearly annoyed, he looked at me suspiciously and said very slowly and deliberately, "So you think you've got good ears then?" I gave the only answer a young boy who wanted to be a piano tuner could give: "Yes!"

Posted by Steve Burden at 23:59 No comments: 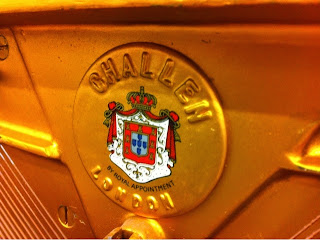 Frank Challen (1862 - 1919) had piano-making blood in his veins but after a family dispute in 1907 he left the family firm, taking his natural talents to work for J. & J. Hopkinson Ltd. His improvements to the Hopkinson range of pianos quickly attracted universal approval and when Hopkinson’s merged with George Rogers & Sons, the refinements were applied to the Rogers range of pianos too. Even today, if these pianos are in good condition, they still have a very classy sound.

In 1959, Evans sold the business and sadly, following the general decline of the British pianos industry, the Challen name changed hands several times until 1984, when the owning company was declared insolvent.
Challen Serial Nos.