The ‘Grover’ name was associated with instrument making in London since the eighteenth century and in 1906, branching out a little from family tradition, Douglas W. Grover began making pianos.

Since London was the centre of piano building at the time, any thought of moving production to the west country would have been considered foolhardy. However, in 1910, Douglas’s wife went to stay with friends in Gloucestershire to recover from an illness. This meant that each weekend, Douglas caught the train down to Stroud. In a short while, he took to the rather more idillic setting of the countryside and decided that he could make his pianos in Stroud. 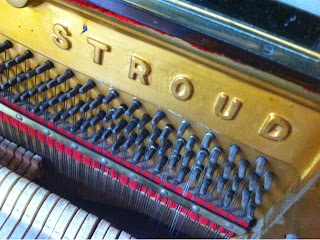 In 1911, moving into an old Cotswold Mill at the village of Woodchester just outside Stroud he established the Stroud Piano Company.

Launching a new, overstrung model in 1930 and sold as a Bentley piano. This ‘Bungalow grand’ as it was called, was an instant success - its distinct casework and moderate size was perfect for the piano-buying home owner of the time. The company changed its name to the Bentley Piano Company.

In 1938, the Woodchester Mill was virtually destroyed by fire but despite the rivalry between fellow piano makers, rivals and suppliers were willing to help at such a time of need. One company who manufactured woodworking machinery, sent the next available of each machine required. Within a week of the fire, production had begun in premises just across the road and in 9 months, output was up to the level before the fire.

From at least the late 1960s, Bentley’s made their own actions. The use of plastic for some of the action parts might have cut production costs, but the long-term life of these crucial parts, proved to be a less than satisfactory. During the mid 1980s the action-making operations were brought to a close and the Langer actions (made by Herberger Brooks) were fitted to their pianos. These, better actions improved the piano noticeably.

In 1989, another fire hit the Woodchester factory - this time destroying about 40% of the production area. Just 4 years later, in 1993, the Bentley Piano Co. Ltd. was acquired by Whelpdale, Maxwell & Codd of London
.